N/A
"Named for a bird-shaped demon from ancient Sumerian mythology, Anzu is a unique and charismatic dinosaur in the Hell Creek menagerie. Members of the oviraptor group to which Anzu belongs were once believed to feed on eggs, but this was based on the false assumption that fossil eggs found alongside specimens belonged to other dinosaurs. In fact, these were oviraptor eggs, and these animals are careful parents that sit upon their nests like modern birds. Anzu are herbivores, using their wide bill to feed on leaves, fruit and seeds. Unique musculature allows their lower jaw to be moved front-to-back, resulting in efficient shearing of vegetation."

Anzu is a genus of large oviraptorosaurian dinosaurs from the late Cretaceous (66 million years ago) of North Dakota and South Dakota, US. It will be a playable dinosaur in Saurian, but will only become available after the game's development is complete.[1]

Anzu is characterized by a toothless beak, a prominent crest, long arms ending in thin, relatively straight claws, long powerful legs with thin toes, and a relatively short tail. Anzu measured about 3 metres (9.8 ft) to 3.5 metres (11 ft) long, up to 1.5 metres (4.9 ft) tall at the hips and 200 kilograms (440 lb) to 300 kilograms (660 lb) in weight, and was the largest North American oviraptorosaur, though the Mongolian genus Gigantoraptor was larger than Anzu. There are remains of very large oviraptorosaur trackways, comparable to a Gigantoraptor size, some known from Hell Creek. It is not known if these tracks belong to Anzu or to another larger relative.

Its diet is not entirely known like with most oviraptorosaurians. But because it had jaws that could cut and shear food with no teeth, Lyson and Sues assume it ate both animals and plants, and perhaps eggs included.

It had been expected that oviraptorosaurs would be found in North America, as well as the documented specimens in Asia, as the two continents had a land connection during the Cretaceous, but the discovery of Anzu indicates that North American oviraptorosaurs were related more closely to each other than to their counterparts in Asia.

The three Anzu skeletons were found in deposits of humid floodplain environments, suggesting that it favored such habitats. This is one way in which caenagnathids appear to have differed greatly from their apparently exclusively Asian oviraptorid cousins, which are mostly found in rocks deposited under arid to semi-arid conditions.

The purpose of Anzu's large crest is unclear; Sues notes that it "is very large and made of paper-thin bone, so it was not able to take much stress. All oviraptosaurs have this crest but it is certainly among the largest in A. wyliei. The most likely function is for display, showing off to members of its own species. The Australian cassowary has a similar crest which is thought to be used to attract mates, so it is possible that A. wyliei could have used its crest in a similar fashion". Another useful function of this crest is the abbility to deflect foliage while walking through the bushes, something also used by modern-day cassowaries and other simillarly crested forest-dwelling animals.

The fossils showed evidence of injuries, including a healed broken rib and an arthritic toe that was probably the result of a tendon being ripped away from the bone (an avulsion fracture). It is not known whether this indicates that the animals fought each other, or were injured by predators.

Anzu has feathers on the majority of its body, including the forearms and tail fan. The female's color is tan and grey to match its habitat and the male's colors are more flashy for the purpose of display. Males also have a larger crest in addition to an overall larger size.[1]

Anzu is an omnivore, eating both vegetation and small prey, including the eggs and hatchlings of other dinosaurs. Because of the rather extreme differences between the two sexes, Anzu males and females have slightly different niches from one another. When dealing with threats, Anzu's first choice is to run. Anzu has a unique ability that allows it to mimic the calls of other dinosaurs in the ecosystem which it uses to both attract prey and bluff potential threats.[1]

Anzu is planned to be a playable dinosaur in the future, but it has yet to be added in the game as an AI, and it will only be released as a playable after the base game is completed, just like Ankylosaurus. In Saurian: A Field Guide to Hell Creek states that Anzu appears in hardwood forests, fern prairies, and in the backswamps of Bone Butte. Currently, it is the only dinosaur, planned to be a playable, that has not yet been added in the game as an AI. 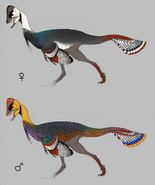 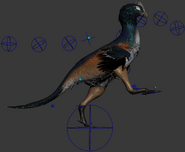 Concept art of male Anzu and chicks, being threatened by an Acheroraptor

Concept of male Anzu impressing a female, by Elia Smaniotto

Concept art of a female Anzu and ornithomimids in their natural habitat, by Adrian Wimmer

Retrieved from "https://sauriangame.fandom.com/wiki/Anzu?oldid=6639"
Community content is available under CC-BY-SA unless otherwise noted.