N/A
"With a body length of up to 6 meters, Dakotaraptor is one of the largest members of the raptor family (Dromaeosauridae) to have ever lived. Despite it's size, Dakotaraptor retains the sleeker, longer-legged build of smaller relatives. Dakotaraptor uses it's trademark giant talons not as slashing weapons, but as hooks, grasping prey with it's feet while flapping its huge wings to keep itself stabilized. It is at this point the animal will begin to feed while its prey is still alive. This technique is known as "raptor prey restraint"."

Dakotaraptor is an extinct genus of dromaeosaurid known from partial skeletons unearthed in South Dakota, USA. Its fossils have been found in the Maastrichtian-age Hell Creek Formation, dated to the very end of the Cretaceous period, making it one of the last surviving dromeosaurids known. It is currently the only playable dinosaur in Saurian.

The fossils discovered in South Dakota show tiny “quill knobs” on the lower arm bones, suggesting Dakotaraptor had feathers all over the body, including wings on its arms.

A study of the known fossils of Dakotaraptor show that in body‭ ‬proportions‭ ‬this genus was actually more like genera such as Deinonychus and Dromaeosaurus than to those of Utahraptor,‭ ‬making a direct link between Dakotaraptor and Utahraptor unlikely. Curiously, Dakotaraptor was more gracile, and had a lighter build more akin to those of these smaller dromaeosaurids than to Utahraptor. This is also consistent with the time that spans between Utahraptor and Dakotaraptor. It has been considered as being a closer relative to the Campanian Dromaeosaurus (being classified as its sister taxon, therefore making them most closely related to each other), so Dakotaraptor's large size is only an example of convergent evolution with Utahraptor. More recent analysis defy the original views that Dakotaraptor was a dromaeosaurine, and cladistic analysis go to the notion that it was instead an unusual large unenlagiine, which would make it the first North American member of the Unenlagiinae. This analysis is still under reviewing, but it is to note the position of Dakotaraptor as a dromaeosaur in general is still very solid.

Dakotaraptor is the second dromaeosaurid dinosaur known from the Hell Creek Formation,‭ ‬with the first being the much smaller Acheroraptor.‭ ‬The only other mainly predatory dinosaur known to have been around at the same time and location and also be bigger than Dakotaraptor is the mighty Tyrannosaurus.‭ ‬Possible prey dinosaurs for Dakotaraptor could include anything from ceratopsian dinosaurs such as Triceratops and Leptoceratops,‭ ‬ankylosaurs and nodosaurs such as Ankylosaurus and Denversaurus,‭ ‬pachycephalosaurs such as Pachycephalosaurus,‭ ‬and hadrosaurs and‭ ‬parksosaurids such as Anatosaurus and Thescelosaurus.

A recent study seemed to show that the wishbones of Dakotaraptor may actually belong to an extinct genus of turtles: Axestemys splendida. If this was true, Dakotaraptor would've no longer have been a valid genus, and merely a chimaera between a theropod dinosaur and a turtle. However, this is dubious at best, as there may be new papers confirming that Dakotaraptor was indeed a valid genus. Plus, the wishbones could easily be removed from the type fossil definition, maintaining the validity of the genus.

The morphs, a robust and gracile one, were present in the fossil material. Studies show that both of these Dakotaraptor were seemingly adults. Reasons for this disparity of shape can vary from individual variety of pathologies (malnourishment or a deficiency during growth may have caused the gracile variety), while the simplest explanation may have been sexual dimorphism, which could suggest that males and females were different from each other in terms of shape. If the latter is true, however, there is still no clue to which is the male or the female.

"Dakotaraptor are not good parents. They will tolerate you as a hatchling but once you become a juvenile they will start to see you as food."

"Dakotaraptor can take down larger prey with Raptor Prey Restraint. Jump onto an animal to initiate RPR. Once mounted, flap to maintain your balance by clicking RMB and damage your prey by clicking LMB."

Dakotaraptor is the first playable dinosaur in the game. Currently the player only has the ability to play this animal, from hatchling to adult, but in the future, Dakotaraptor gameplay will be complemented, and the game will soon have other playable dinosaurs. Currently in the game, the Dakotaraptor is able to practice RPR (Raptor Prey Restraint) to restrain prey that are about it's size, or larger. Young Dakotaraptor are also able to climb trees and glide with their pennaceous wings, a useful tool to escape from predators and cover large distances without risking aggression from other animals.

Dakotaraptor are depicted as having very bad parental care. Apparently both the male and the female form a lasting bond, but they don't seem to feed their babies, as they only tolerate their presence. The parents will hunt for food, while the babies will only follow them for protection and subsistence. The parents will only tolerate them until they are juveniles, to which they will see them as food and competition. Dakotaraptor gameplay must be seen as a individual gameplay, to which the hatchling will have to learn how to survive alone way before their parents rejection. Players usually kill their siblings for easy food. The player's parents are a fine source of nourishment, once they hunt something big enough to leave some food for you, or when they die. The parents will often steal food that was caught by the player, to emphasize their lack of parental care.

Dakotaraptor are depicted as cannibal creatures. Other members of your own kind release yellow/orange scent particles that help you know if one is nearby. Players that attempt to hunt another of the same kind, should target animals of the same size or smaller, as each stage of development has usually a big increse in health, bite damage and stamina.

Hatchlings will start with their parents and hatchling gameplay is particularly difficult, as the parents protection is uncommon, your predators are abundant and your prey are limited. Hatchlings hunt small animals like Chamops, Didelphodon, Lepisosteus and birds, and are very vulnerable to any predator. Basilemys is also a preferred prey item by this stage, as it does not run away, and its an easy meal, as long as the player is persistent enough in its biting. Hatchlings can climb trees to avoid ground-dwelling carnivores. The player is an hatchling from age 0-1.

Juveniles have an increase in stamina and durability. Although they pretty much hunt the same thing as hatchlings, the player can try and take down a Acheroraptor or a Thescelosaurus, the latter of which is advised to hunt as a late juvenile, using RPR, which starts being used by this stage. The player is therefore much more adapted to dodge dangers. Climbing mechanics are improved by the ability of gliding, as their wings are successfully developed. The player is a juvenile from age 1-3.

Subadults are nearly the top predator they will be in adulthood. As they reach sexual maturity, subadults are able to take down a myriad of other animals with ease, like Acheroraptor, Thescelosaurus, Champsosaurus and Palaeosaniwa, the latter must be done with care, as it is a venomous animal. The player loses the ability to glide or climb trees, but RPR is a excellent tactic of killing prey. An ambitious player can attempt to take down Pachycephalosaurus or ornithomimids, but it is still hard, being easier as it grows older. The player is a subadult from age 3-6.

Adults are the oldest you can get, morphologically. In this stage, RPR is amazingly perfected and can be used to take down Pachycephalosaurus, ornithomimids and crocodylomorphs with some ease. The player is an adult from age 6-11. Once the player survives to age 11, they will become a super-adult, with an increase in stamina, health and durability. Super-adults, superficially, don't look much different from fresh adults, but they have slightly bigger claws, older, more ruffed feathers and a generalized bulkiness. Once in this stage, the player can take down crocodylomorphs with much ease, if it manages to avoid their bite, and attempt to take down previously impossible prey, like Triceratops, Denversaurus, Ankylosaurus and Anatosaurus, but it is still very hard.

The coloration of Dakotaraptor changes as it grows, but throughout its life it is fully feathered, save for its snout. As a fully grown adult, its feather coloration is brown/black, white and grey, along with yellow along the bottom of its feet. Males and females have no sexual dimorphism in the game. 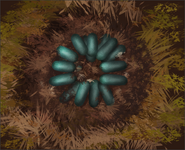 Subadult Dakotaraptor as it appears in the game's encyclopedia

Concept of the hypothetical appearance of a featherless Dakotaraptor

Juvenile Dakotaraptor in a tree
Add a photo to this gallery
For a more complete gallery, visit Dakotaraptor/Gallery
Retrieved from "https://sauriangame.fandom.com/wiki/Dakotaraptor?oldid=6278"
Community content is available under CC-BY-SA unless otherwise noted.