N/A
"During the Late Cretaceous, the group including all modern birds appeared and began to diversify. Those in Hell Creek occupy a water-marginal habitat, much like modern waders. Wide, thin toes allow them to walk over soft mud, while a narrow bill is used to probe for seeds and small invertebrates. Why this group of dinosaurs survived the great extinction has been linked to their close ties to water, incredibly fast growth rates, and ability to feed on seeds. Their survival likely owes to a combination of these factors with a little luck thrown in."

The DePalma's Onithuran, is a non-playable ornithurine[1] bird in Saurian.

There have been multiple birds belonging to Ornithurae uncovered from the Hell Creek Formation and they are noteworthy component of the ecosystem of the Bone Butte site in South Dakota.[2] This bird, in particular, appears to be based on an ornithurine shorebird that was discovered in the Bone Butte. The specimen is nearly complete and would have the size of a small duck in life. DePalma (2010) reports that the specimen is currently under further study in preparation for the specimen to receive a description.

It lived around the waterways of the Bone Butte region.

The DePalma's Ornithuran appears in Saurian. It is portrayed with feathers on pretty much all of the body, including wings on the forearms and a tail fan on the tail. Its' color is mainly white with back wings and markings on its' back and tail, red feet, and a mix of red, yellow, and black on its' beak.

The DePalma's Ornithuran serves as a potential food item for the player, but it is hard to catch once the bird spots the player and flies away. It is found close to rivers and other bodies of water. Oddly, they don't make scent clouds, but they can be detected by scent, being represented by a bright blue outline, which allows them to be more easily seen between the dense vegetation and the white sand. Currently it is the only flying creature that the player can interact with in the game, so, if the player wants to take one down, it must sneak and attack from behind before it flutters away. Stealth is the simplest way to kill one. The DePalma's Ornithuran is a easy food item for a Dakotaraptor at any life stage.

The DePalma's Ornithuran can be seen flying in flocks through the sky. This serves as an ambience, as the player has few chances of reaching them during this, limiting the player to only being able to watch them fly over above.

Currently, the DePalma's Ornithuran does not display ontogeny or sexual dimorphism. 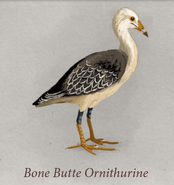 It appears that originally the bird was to be Cimolopteryx, a similar ornithurine which has been found in the Late Maastrichtian Lance Formation of Wyoming and possibly the Hell Creek Formation as well.[3] It had been previously been featured in concept art made by RJ "Arvalis" Palmer.

Retrieved from "https://sauriangame.fandom.com/wiki/DePalma%27s_Ornithuran?oldid=6302"
Community content is available under CC-BY-SA unless otherwise noted.