N/A
"In the vast Western Interior Seaway lives a much more impressive type of reptile. Despite its gargantuan size and fearsome appearance, Mosasaurus is not a dinosaur, or even closely related to them. It is, in fact, a type of giant marine lizard that was restricted to the Cretaceous period. There has been much argument as to where mosasaurs fall within the lizard family tree, but some recent compelling evidence suggests they may be most closely related to snakes among living groups. Fossil evidence of giant mosasaurs in Hell Creek has only very recently been uncovered, but they are also known from the underlying Fox Hills formation."

Mosasaurus is a genus of mosasaur, giant aquatic squamates that roamed the seas of the Late Cretaceous period. Mosasaurus have been found in parts of Europe and North America. While no Mosasaurus fossils are known specifically from Hell Creek, it was alive at the end of the Maastricthian and lived in the neighboring Western Interior Seaway, so it's presence on the Hell Creek coast is perfectly plausible.

Mosasaurus was one of the first mosasaurs to be discovered. They were very robust compared to other large mosasaurids as well as more robust skulls implying a stronger bite. They were believed to feed on various marine life including ammonites, sea turtles, hesperornithids, plesiosaurians, and even other mosasaurids as it was a highly aggressive hunter.

Mosasaurus is dark gray with a lighter underbelly and subtle striping on the sides. This coloration, with a dark top and lighter belly, is common to some aquatic animals, namely sharks and dolphins.

Mosasaurs are known to have had tail flukes, used for propulsion. Saurian's Mosasaurus also has a forked tongue, likely because its closest living relatives, the snakes, do.

These animals may have lurked and pounced rapidly and powerfully on passing prey, rather than chasing after it.

Mosasaurus appears in the game. Mosasaurus was added for a particular function: to keep the player from swimming out too far into the ocean. If the player goes out too far, they will be eaten by the Mosasaurus, preventing them from reaching the edge of Saurian's map.[1] Mosasaurus' only other function in the game is that it is possible to find one beached.

Mosasaurus spawns every time the player comes too close to the deeper waters, but can also be observed taking down other AI creatures who make the same mistake. The player is able to dodge a Mosasaurus attack by swimming back to the beach, if it is close enough for the sea monster to give up on the chase. The Mosasaurus is an unusual AI creature in the game, given that it only spawns when a creature comes to the ocean, and that it is impossible for one to be taken down either by the player or by another creature. Mosasaurus doesn't die of thirst or hunger in the game. It's also the only living thing in the game that is absent from the encylopedia. Mosasaurus carcasses are not the result of once living Mosasaurus dying, but rather just a world-building element, that happens to be on the beach, waiting for another animal to feast on its meat. A Mosasaurus carcass, probably, does not decompose, so the only way to make it disappear is by eating it until it has no more meat left.

The first design by Alex "Doc" Lewko depicted it as having a color scheme similar to most depictions following the study "Skin pigmentation provides evidence of convergent melanism in extinct marine reptiles" by Johan Lindgren et al. with the upper body being black and the underbelly being white. The body of this design was slender and serpentine-like most depictions of Mosasaurus.

The Mosasaurus saw a later-now scrapped design-by RJ Palmer. Palmer's design was bulkier and shorter with a dorsal fin. Also worth noting, was that the coloration of the Palmer designs Mosasaurus were more vibrant than what the findings by Lindgren et al. suggests. The most commonly seen color of Palmer's colorations being a brown with a spotted pattern with vertical lines. The reason why the colorations did not reflect the 2014 findings was because the concepts were done a year before in 2013.[2] Parker has stated that these designs of the Mosasaurus were not temporary and the game developers were seeking for more options before settling on a final design.[3]

Indeed, Mosasaurus later received a third design and model in 2017. RJ Palmer created the concept art for this design and was modeled by Jake Baardse under the guidance of paleontologist Nathan Van Vranken.[1]

It is stated that the Mosasaurus in game is impossible to kill. 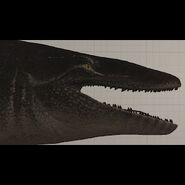 Add a photo to this gallery

Retrieved from "https://sauriangame.fandom.com/wiki/Mosasaurus?oldid=6287"
Community content is available under CC-BY-SA unless otherwise noted.