5.5 meters (18 feet)[1]
"Despite its bird-like beak, Quetzalcoatlus is not a dinosaur but one of the last of the pterosaurs, great flying saurians that ruled the skies of the Mesozoic. Unlike its more famous cousin Pteranodon, Quetzalcoatlus did not hunt fish at sea, but instead is a land-based predator. Hunting like a modern stork, these pterosaurs can be seen in the open areas of the floodplains, probing the ground cover for small animals, including baby dinosaurs. They are still capable fliers and must be, as they are vulnerable prey to dinosaurian predators."

Quetzalcoatlus is an azhdarchid pterosaur known from the Late Cretaceous of North America (Maastrichtian stage) and one of the largest known flying animals of all time. It is a member of the family Azhdarchidae, a family of advanced toothless pterosaurs with unusually long, stiffened necks. Quetzalcoatlus is currently in the video game Saurian.

When it was first discovered, scientists estimated that the largest Quetzalcoatlus fossils came from an individual with a wingspan as large as 15.9 meters (52 feet), choosing the middle of three extrapolations from the proportions of other pterosaurs that gave an estimate of 11, 15.5 and 21 meters respectively (36 feet, 50.85 feet, 68.9 feet). In 1981, further study lowered these estimates to 11–12 meters (36–39 ft). More recent estimates based on greater knowledge of azhdarchid proportions place its wingspan at 10–11 meters (33–36 ft). While some studies have historically found extremely low weight estimates for Quetzalcoatlus, as low as 70 kilograms (150 lb) for a 10-meter (32-foot-10-inch) individual, a majority of estimates published since the 2000s have been higher, around 200–250 kilograms (440–550 lb).

Skull material (from smaller specimens, possibly a related species) shows that Quetzalcoatlus had a very sharp and pointed beak. That is contrary to some earlier reconstructions that showed a blunter snout, based on the inadvertent inclusion of jaw material from another pterosaur species, possibly a tapejarid or a form related to Tupuxuara. A skull crest was also present but its exact form and size are still unknown.

Azhdarchids were likely terrestrial stalkers, similar to modern storks, and probably hunted small vertebrates on land or in small streams. Though Quetzalcoatlus, like other pterosaurs, was a quadruped when on the ground, Quetzalcoatlus and other azhdarchids have fore and hind limb proportions more similar to modern running ungulate mammals than to their smaller cousins, implying that they were uniquely suited to a terrestrial lifestyle. In 2010, Donald Henderson argued that the mass of Q. northropi had been underestimated, even the highest estimates, and that it was too massive to have achieved powered flight. He estimated it in his 2010 paper as 540 kg. Henderson argued that it may have been flightless. However, most other flight capability estimates have disagreed with Henderson's research, suggesting instead an animal superbly adapted to long-range, extended flight. In 2010, Mike Habib, a professor of biomechanics at Chatham University, and Mark Witton, a British paleontologist, undertook further investigation into the claims of flightlessness in large pterosaurs. After factoring wingspan, body weight, and aerodynamics, a computer model led the two researchers to conclude that Q. northropi was capable of flight "up to 80 miles an hour for 7 to 10 days at altitudes of 15,000 feet". Mike Habib further suggested a maximum flight range of 8,000 to 12,000 miles forQ. northropi. Henderson's work was further criticized by Habib, who pointed out that although Henderson used excellent mass estimations, they were based on outdated pterosaur models, and that anatomical study of Q. northropi and other large pterosaur forelimbs show a higher degree of robustness than would be expected if they were purely quadrupedal. Habib believes that large pterosaurs most likely utilized a short burst of powered flight in order to then transition to thermal soaring.

Although Quetzalcoatlus has no evidence of hair-like filaments known as pycnofibres, its' likely that due to phylogenetics from creatures like Scaphognathus, Jeholopterus, and Sordes, all pterosaurs, including Quetzalcoatlus had pycnofibres all over their body.

Quetzalcoatlus is portrayed with pycnofibres. Its' color is dark brown, black and white, and tan wings to match its' habitat.

Quetzalcoatlus is currently in Saurian as an AI. It does not display any sexual dimorphism or ontogenic stages. In the game, the player can't yet properly interact with the Quetzalcoatlus as it is a purely flying creature. The player can only see the pterosaur flying and screeching in the sky, so ground-dwelling Quetzalcoatlus will only be found in future versions of the game.

Behind The Scenes Edit

The Quetzalcoatlus previously had a different appearance as depicted in older concept art. The original design possessed a more orange beak and a lighter brown plumage. Its neck was covered in long thick pycnofibres akin to a ruff or mane. Its neck stance was also much lower to the ground, though this could have been because it was swallowing a Champsosaurus. 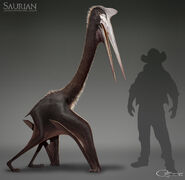 Concept art of a Denversaurus carcass, infested by Quetzalcoatlus, a subadult Dakotaraptor, a Acheroraptor, a Palaeosaniwa and a Chamops

Add a photo to this gallery

Retrieved from "https://sauriangame.fandom.com/wiki/Quetzalcoatlus?oldid=6215"
Community content is available under CC-BY-SA unless otherwise noted.