N/A
"Triceratops (Three-Horned Face) is one of the most recognizable non-avian dinosaurs. These animals inhabit stretches of open prairies or marshlands in small herds, where they feed on ferns and woody shrubs. Triceratops are extremely tenacious and aggressive in temperament. Specimens have been observed surviving with their horns, tails and even snouts partially bitten off. This gives these very old animals, with their denuded brow horns and various scars, a hardened, battle-worn character. Even adult T. rex must take caution of these brutes."

Triceratops is an extinct genus of herbivorous ceratopsid dinosaur which lived during the late Maastrichtian stage of the Late Cretaceous Period, around 68 to 66 million years ago in what is now North America. It will be one of the playable dinosaurs in the base Saurian game.

Two species, Triceratops horridus and Triceratops prorsus, are considered valid, although many other species have been named. In accounts to the Hell Creek Formation. T. horridus is found in the lower half of the formation, while T. prorsus is found in the upper third of the formation, just before the layer marking the end of the Cretaceous. Triceratops was a very large creature, with adults weighing up to 9 tons, as well as some specimens thought to weigh upwards of 13 tons.

There has been much speculation over the functions of Triceratops' head adornments. The two main theories have revolved around use in combat, or display in courtship, with the latter thought now to be the most likely primary function. Triceratops were long thought to have possibly used their horns and frills in combat with predators such as Tyrannosaurus, the idea being discussed first by C. H. Sternberg in 1917 and 70 years later by Robert Bakker. There is evidence that Tyrannosaurus did have aggressive head-on encounters with Triceratops, based on partially healed tyrannosaur tooth marks on a Triceratops brow horn and squamosal; the bitten horn is also broken, with new bone growth after the break. Which animal was the aggressor is not known. Since the Triceratops wounds healed, it is most likely that the Triceratops survived the encounter and managed to overcome the Tyrannosaurus. Later discoveries have also found some Triceratops that were likely killed by Tyrannosaurus. The theory of their use in sexual display was first proposed by Davitashvili in 1961 and has gained increasing acceptance since. Evidence that visual display was important, either in courtship or in other social behavior, can be seen in the fact that horned dinosaurs differ markedly in their adornments, making each species highly distinctive. Also, modern living creatures with such displays of horns and adornments use them in similar behavior. A 2006 study of the smallest Triceratops skull, ascertained to be a juvenile, shows the frill and horns developed at a very early age, predating sexual development and thus probably important for visual communication and species recognition in general.

Triceratops are often thought to be herbivorous, and because of their low head, their primary food was probably low growth, although they may have been able to knock down taller plants with their horns, beak, and bulk. The jaws were tipped with a deep, narrow beak, believed to have been better at grasping and plucking than biting. Triceratops teeth were arranged in groups called batteries, of 36 to 40 tooth columns, in each side of each jaw with 3 to 5 stacked teeth per column, depending on the size of the animal. This gives a range of 432 to 800 teeth, of which only a fraction were in use at any given time (tooth replacement was continuous and occurred throughout the life of the animal). They functioned by shearing in a vertical to near-vertical orientation. The great size and numerous teeth of Triceratops suggests that they ate large volumes of fibrous plant material, with some suggesting palms and cyads  and others suggesting ferns, which then grew in prairies. Some paleontologists, however, believe that Triceratops may have been omnivores, sometimes scavenging on dead animals.

Its back and tail also had a series of weird, fist-sized bumps, each one holding a nipple-like structure which has yet to be explained by scientists. Many scientisits think that they may be bristle-like feathers that were found on Psittacosaurus. The purpose for these bristle-like feathers are unknown, but its' possible that if this skin impression is showing the roots of these feathers, then all ceratopsians likely had them due to all of them being descended from Psittacosaurus. However, some studies seem to show that these bumps were just osteoderms like Carnotaurus.

Triceratops prorsus will appear in Saurian as a playable dinosaur. It is portrayed with scales and osteoderms running down the length of the body. The colors along its body include brown with yellow spots. On its head is a red, yellow, and white face, frill and horns for display.

Triceratops is currently on Saurian as a AI, but it is planned to be the next playable dinosaur. Male and female skins are known in Triceratops, but the game is yet to add ontogenic variety in this animal. As a Dakotaraptor, this animal is nearly impossible to take down. One can try take one down as a super adult with enough persistance, but it is highly difficult, given that they can kill you with a few blows. You can try to challenge a Triceratops once you reach the super adult stage, but trying to kill it by using RPR is almost impossible, since it can immediately throw you off as soon as you mount it. Biting it's tail is the best option, however, it costs a lot of time. If the player does not attack a Triceratops, they tend to be very peaceful, although they may charge at you as an adult. Triceratops usually live in herds composed by four to six individuals, mostly made by females, with one dominant male.

Juvenile Triceratops in its environment 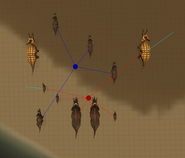 Demonstration of the ontogenic growth of Triceratops

Concept of a juvenile Triceratops creche drinking, while other unthirsty individuals stay behind

Demonstration of Triceratops selection wheel
Add a photo to this gallery

''Triceratops'' Social Behaviour
Add a photo to this gallery

Retrieved from "https://sauriangame.fandom.com/wiki/Triceratops?oldid=6459"
Community content is available under CC-BY-SA unless otherwise noted.